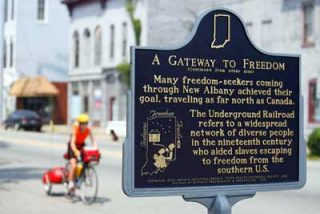 [Image Description: An official plaque in the foreground reads, “A Gateway to Freedom. Many freedom-seekers coming through New Albany achieved their goal, traveling as far north as Canada. The Underground Railroad refers to a widespread network of diverse people in the nineteenth century who aided slaves escaping to freedom from the southern U.S.” In the background, a blurred bicycle rider in red rides down a paved street.]

Did you know there is a bicycle route that travels along the Underground Railroad – from Mobile, Alabama to Owen Sound, Ontario? The Adventure Cycling Association and the Center for Minority Health from Pittsburgh, PA partnered to develop this 2,100 mile route which uses the historic “Follow the Drinking Gourd” spiritual as a guide through America’s past and as an inspiration for cultural exploration and physical well-being.

For more information check out: