“The first time I understood what freedom and strength meant, I was on my bike.”

On May 25-26th, Bike Works Program Coordinator Jim Labayan rode the (20th annual & last-ever) 24 Hours Round the Clock mountain bike race in Spokane WA during his 24th year. On his blog, Forks, he reflects on what motivated him to take on this challenge, from simply wanting to have autonomy over when to get his next sugar fix, to measuring up to his absurdly fit older brother Gus, to leading high school students on the 210 mile ride from Seattle to Portland with the Major Taylor Project. Read the whole story here about the challenges and lessons he learned from this experience. 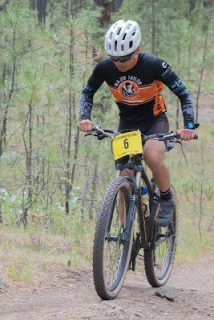 “I first felt a strong pull to long distance cycling when I rode around the Washington Olympic Peninsula in 2013. Truthfully, it was awful in many ways. I was lonely, hungry, and green. But it also offered me so much escape from the pent up traumas of my cross-cultural and turbulent upbringing. I fell in love with the rhythm of climbing hills, the fatigue in my legs, the aching in my back, soreness in the arches of my feet… I fell in love with getting lost — mentally and geographically.

…Altogether, I rode for a total of 19 hours 32 minutes and 51 seconds. I rode over 200 miles and climbed over 11,000 feet. I got two hours of sleep, and the rest of the time was spent taking small breaks. I narrowly earned third place by finishing 9 minutes ahead of fourth place — and extremely narrow margin for a 24 hour race. More data can be found here for all you cyclists, data nerds, or for those curious enough…

That being said, I could have done better. If I had not slept and ridden through the rain, I might be sitting in second place. But that is not the point. I laid everything that I was willing to offer down on the line. And that is enough.”

Jim Labayan is a Program Coordinator for Bike Works, working with youth & adults on bicycle ridership, ownership, and leadership skills. He has been with the organization since September of 2018.