Bike Works Board Member Jess Kim is a Bay Area transplant, a multi-modal engineer for the Seattle Department of Transportation, and plays in local pop-rock band Coach Phillips. Jess and her SDOT team are responsible for designing roadway infrastructure in the city’s Bicycle Master Plan and building connections to existing and future bicycling facilities in Seattle.

A bike ride led to Jess eventually joining the Bike Works Board. This Sunday, July 29, she’s bringing together bikes, bands, and (cold) brews for Bands for Bike Works at Conduit Coffee Company on Westlake Ave N, just south of the Fremont Bridge.

As she told a former coworker, “My bike life trifecta has finally come together: I work in bikes, I ride bikes, and I volunteer for bikes. Everything has somehow come together.” 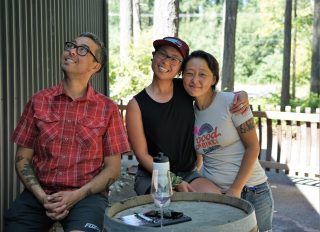 How did you get involved with Bike Works?

I went on a bike ride — stopping at all the donut shops — for a friend’s birthday the first year I moved to Seattle. One of the people on that birthday ride works at Bike Works — Mike Buendia, he works at the warehouse — and so we got to talking. I was looking for opportunities to volunteer with an organization that worked in bicycle advocacy and education, similar to Bike East Bay in the Bay Area where I helped draft preliminary plan proposals.

I was immediately drawn to Bike Works and their mission to empower youth through bikes and foster strong communities.

My initial thought was to be a volunteer at Bike Works’ Volunteer Repair Parties and learn some grease monkey skills while helping a good cause, and found myself sitting among the Bike Works Board — a role I have no previous experience in, but figured why not give it a go. While I haven’t been able to make it out to a repair party just yet, I have been an active Board Member getting involved with different committees and organizing a cultivation event which is Bands for Bike Works!


Tell me about Bands for Bike Works.

I got the idea, I guess, because I’m in one of the bands that’s playing. We’re called Coach Philips. I love planning events and bringing people together. When I was in Oakland I helped organize a local festival down there and part of my role was to book and manage the entertainment.

And so an event like Bands for Bike Works seemed fitting. I just figured I’d bring in the music community with the bicycling community into this ultimate event.

And coffee on top of that.

And coffee! Exactly! Yeah, a lot of different communities coming together all for Bike Works.

What else should people know about this Sunday?

There’s going to a bike drive where you can bring us your old bikes as well. And a bike valet, too. Conduit Coffee Company is right on Westlake Ave N next to the Westlake Cycle Track, so we’re hoping to pull some Sunday strolling families in to learn all about the amazing programs at Bike Works and listen to some music. It’s a family-friendly event.

We’re getting donated beer from Flying Bike Cooperative Brewery, that’s up in Greenwood, cider from Seattle Cider Co. in Georgetown, bubblies from DRY Soda Company, and cold brew coffee from Conduit. Neema’s Comfort soul food truck will be on-site and there’s also going to be a raffle. And live music. And all the bikey people. There’s a lot happening that day.

“Sour Notes is a pop punk band from Seattle, WA formed by four friends who realized they liked writing catchy songs about being bitter.”

Coach Phillips’ song VHS Dating was voted one of NPR Music​’s top 10 Heavy Rotation songs in May! Check out the video below: